Below are the first pages of Natania Barron’s story “Of Webs and Windows in Pescadero”: 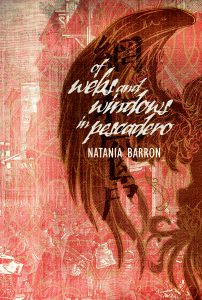 Outside, fog wreaths the factory. From a distance it’s impossible to judge just how close it lies to the harbor. But some of the older children tell stories of escape and freedom, adventures of past factory workers climbing the scaffolding and plunging into the chilly water, swimming to a new life.

Lai Biyu tells Zu Zhilan not to believe this; she is a little thing and so gullible. And Lai Biyu knows well enough how quickly hope festers, and how when extinguished it leaves a gaping hole inside that never goes away. She does not want Zu Zhilan to feel as she does, even if she is a mouthy little thing who sleeps too much.

Yes, Lai Biyu knows better than to believe these stories because she is now almost seven and must be the responsible one. So, as the fog rolls by the highest windows, she does not think about freedom, because it is a concept now lost to her. All there remains in her mind are the looms and the threads and the sick sweet scent of silk, twisting and lengthening and filling up the dark hole inside.

And Zu Zhilan because everyone has decided that she is responsible for her.

When she began working at the silk factory, sometimes she used to think about her mother in the tea fields of home. She would remember Mother’s blue dress rustling across the leaves as she follows the other harvesters into lunch, the dry, chilly air coming down from the mountains. She could hear their voices call to one another softly, then break into song.

But the songs are gone, now. And so is the face of her mother.

All she remembers is the fire that took her mother in the first silk factory. The fire that melted her mother and left her own face and hands marred. The fire that, for a small moment, filled her with peace before it left everything else in its wake.

Zu Zhilan, too, used to have a mother who worked at the factory, says Meng Si, the factory manager. He is fat and tired all the time, but he somehow manages to remember little details now and again. Like all the others, Meng Si calls Zu Zhilan Lai Biyu’s little sister, only because they speak the same way. He says that Zu Zhilan’s parents were She, just like Lai Biyu’s.

But here on the other side of the world, even a tenuous connection is treasured. Or else used as an excuse. In this case, it’s usually left up to Lai Biyu if her “little sister” ever gets into trouble. Which is both often and cumbersome. It isn’t fair that, due to a simple twist of their tongues, she is made to keep after the little girl.

Since the fire, Lai Biyu has felt so alone. So it’s good that the little one is there sometimes. Even if Little Sister is too lazy for her own good, it helps Lai Biyu forget the fire.
It was, after all, another world away. Now her life is the whir of the looms and the feeling of the soft, wet cocoons in her hands, and the sweet stink of silk.

Lai Biyu frowns down when she notices Zu Zhilan has fallen asleep at her station again. She is about five, Lai Biyu thinks, but it’s difficult to say because of her size. She’s smaller than the others her age, but cleverer and quicker. When it comes to fixing the machinery, no one does it better than Zu Zhilan, and so they keep her about. But if anything goes missing or misplaced, it’s probably because of her, as well. She’s supposed to be helping the girls sort the cocoons in the hot vats when she isn’t directly needed. Which she interprets as an ideal time to nap.

Zhang Lin, the mistress of the children, has never liked Zu Zhilan in the least. But then, Zhang Lin doesn’t like much of anyone. Meng Si says it’s because the man she was supposed to marry in San Francisco decided he didn’t want her one day and went up North with some Japanese woman who made delicious food. He says her face looked like that, so full of frowns, because she was forced to eat her own food which tasted like bitter tears.

Whatever the cause of her unhappiness, Zhang Lin has the unfortunate task of working both long hours in the silk factory and shouldering the responsibility of getting the children to work on time and in their palettes at night, alerting the managers when the children are too sick to work, or need to be given up on all together.

“Hsst!” Lai Biyu says, shaking her leg a bit under the loom rigging so that Zu Zhilan might be impacted. But as usual, the little girl does nothing in response save for a sweet snore.